I'm over on the legendary Janice Hardy's blog today discussing world-building tips on writing science fiction/fantasy. Come on by! 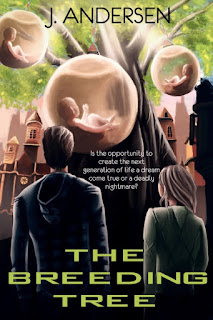 Today I have J. Andersen on the blog to discuss her new novel, THE BREEDING TREE, set to release September 21. But before we get into all the fun, nitty-gritty details about the book, let's rack her brain first about the craft of writing and her personal writing journey.


1.      Tell us a bit about your writing background. When did you first start to write?

Well, I recently found an assignment from third grade where I said I wanted to be famous for writing a book. So, I guess it started then. I wrote a bit in high school. Short stories mostly. Won a few high school level writing contests. But when college came around, creative writing was laid aside in lieu of term papers. Then, when I started teaching, the desire to write resurfaced. I was reading what my students were reading and kept thinking, I could do this. Now I’m doing it full time.

I love YA the best. It’s what I like to read and write. I’ll occasionally pick up women’s fiction, but I always come back to YA. There’s something about it that draws you in like no other type of book can. I think we all think back to our youth, no matter how far away that was, and can relate to the characters trying to figure out who they are. There’s something attractive about that.

3.      I find it interesting to know what environment people write in. Do they use a pen and paper, laptop? Quiet room, music or what? Dog at their feet? Cat on the desk? Just whatever makes it comfortable to be productive.

My environment changes. For the most part, I write at a huge desk in my kitchen. Right now, it’s covered in papers and books and about 37 pens lying all over the place. In all that, I can never find my reading glasses.  I’ll also do the front or back porch, depending on if The Bug wants me to watch her play or is willing to play on her own.

Cafes are also great places to write. I’ve given up Starbucks for local shops. I’ve decided to try to support the local businesses as much as possible. There are a lot of cool coffee shops and breakfasts cafes around here that I never knew existed. Each place has a slightly different feel and helps me to get into creativity mode. Also, I have a friend who goes with me and keeps me accountable. I always find myself more productive when I can bounce ideas off someone in the process of writing. So, a special thanks goes out to Beth Hadley for keeping my mojo flowing.

I also write on the go. Soccer games, guitar lessons, waiting at the doctor’s office. I try to have a little notebook to get some ideas down as they come.

Most of the time I write on the computer, but I do find that if I’m stuck or if I can’t bring my laptop where I’m going, a notebook and pen work just as well. I plan out all of my novels using a large paper and a rising/falling action triangular diagram. (You know, the kind your middle school English teachers used to torture you with.—Remember, I was a middle school English teacher.) I don’t always stick to the outline exactly, but at least I know where my major plot points are.

I think the best advice is to write…no matter who tells you you can or can’t. Keep writing. Keep growing. Be willing to take critiques and learn from them. Read everything you can on writing. Test out the styles or advice those books/people give and find what works for you. That’s the key. Not all the advice you get is going to work for you, but you’ll never know if it does or doesn’t unless you give it a try. And lastly, READ!

Is the opportunity to create the next generation of life a dream come true or a deadly nightmare?

When seventeen year old Katherine Dennard is selected to become a "Creation Specialist" in Sector 4, the opportunity sounds like a dream come true. But Kate soon discovers the darker side of her profession - the disposal of fetal organs and destruction of human life. It makes sense, really. In a society where disease and malformations don't exist, human perfection demands that no genetic "mutants" be allowed to live. For Sector 4, "survival of the fittest" is not just a theory - it's The Institute's main mission.

When Kate discovers that The Institute is using her DNA to create new life, her work gets personal. In order to save her unviable son, she'll have to trust Micah and his band of underground Natural Born Rebels. The problem is, if The Institute discovers her betrayal, the next body being disposed of could be hers. 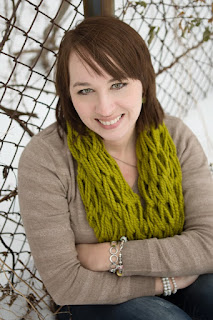 There’s not much to do growing up in a small town in Western, NY, so J. Andersen wrote stories and won high school writing contests. But in college her writing was limited to term papers. While teaching middle school she began to read young adult books and got serious about writing. She now writes full time, volunteers at the town library, helps to run a School of the Arts at her church, and sings in the church band. She enjoys good coffee—read: home roasted by her husband—crafts, baking, and chasing after her children. You’ll rarely see J. without a book in her hands, and that’s the way she’d like to keep it.

NEXT DOOR TO A STAR by Krysten Lindsay Hager... New Release!

Title: Next Door to a Star

After Hadley’s best friend moves away and she gets on the bad side of some girls at school, she goes to spend the summer with her grandparents in the Lake Michigan resort town of Grand Haven. Her next door neighbor is none other than teen TV star Simone Hendrickson, who is everything Hadley longs to be—pretty, popular, and famous—and she’s thrilled when Simone treats her like a friend.
Being popular is a lot harder than it looks.

It’s fun and flattering when Simone includes her in her circle, though Hadley is puzzled about why her new friend refuses to discuss her former Hollywood life. Caught up with Simone, Hadley finds herself ignoring her quiet, steadfast friend, Charlotte.

To make things even more complicated, along comes Nick Jenkins…

He’s sweet, good-looking, and Hadley can be herself around him without all the fake drama. However, the mean girls have other ideas and they fill Nick’s head with lies about Hadley, sending him running back to his ex-girlfriend and leaving Hadley heartbroken.

So when her parents decide to relocate to Grand Haven, Hadley hopes things will change when school starts…only to be disappointed once again.

Is this really what it’s like to live…Next Door To A Star?

The school year should end right after spring break, because all anyone can focus on is summer vacation. You can’t learn anything new, because all you can think about is all the fun stuff you’re going to do once you don’t have to get up at the butt crack of dawn. Summer always seems full of possibilities.

Nothing exciting ever happens during the school year, but maybe, during summer vacation, you could run into a hot celebrity and he’d decide to put you in his next music video. Okay, it wasn’t like I knew anybody that happened to, but my grandparents did live next door to a former TV star, Simone Hendrickson, and Simone was discovered in an ice cream parlor one summer. Of course, she lived in L.A. at the time and was already doing plays and commercials, so the guy who discovered her had already seen her perform. But hey, it was summer, she got discovered, and that was all that mattered.

Amazing stuff didn’t happen to me. You know what happened to me last summer? I stepped on a bee and had to go to the emergency room. They’re not going to make an E! True Hollywood Story out of my life. I didn’t go on exotic vacations—like today, I was being dragged along with my parents to my cousin’s graduation party. Most people waited until at least the end of May before having a grad party, but Charisma was having hers early because she was leaving on a trip to Spain. I was dreading this party because I didn’t want to listen to everybody talk about how smart and talented Charisma was—making me feel like a blob in comparison—but my mom RSVP’d even though I said I’d rather die than go. My death threats meant nothing. But still, for some strange reason, I had a feeling this summer was going to be different.

Krysten Lindsay Hager is an obsessive reader and has never met a bookstore she didn’t like. She’s worked as a journalist and humor essayist, and writes for teens, tweens, and adults. She is the author of the Landry’s True Colors Series and her work has been featured in USA Today and named as Amazon’s #1 Hot New Releases in Teen & Young Adult Values and Virtues Fiction and Amazon’s #1 Hot New Releases in Children’s Books on Values. She’s originally from Michigan and has lived in South Dakota, Portugal, and southwestern Ohio. She received her master’s degree from the University of Michigan-Flint.

Interview over on M.A. Foxworthy's Blog

Fellow YA dystopian author M.A. Foxworthy​ is hosting an interview with me on her blog today where I discuss my writing and the dystopian genre. Stop on by and thanks for hosting, M.A. Foxworthy!