FINISH HIM by Deanna Dee...Author Spotlight! 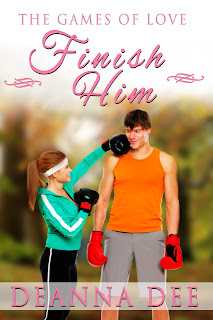 
Sonya Black never expected a petty sibling quarrel could lead to her sister being drugged. Overcome with guilt, Sonya vows to bring the jerk to justice. When she dives into her own investigation, she lands belly up in the company of Jaxon Nyles, the security guard who may have all the answers.

But being a detective isn’t as easy as Sonya thinks. On top of that, Jaxon always seems to be in the right place at the right time. Is he a suspect, or is he falling for her? More important, is she falling for him?

The round has begun. Who will flirt? Who will win? Will hearts break in the process?

With a complex pressing of buttons, the screen goes dim, and my opponent explodes into a fountain of blood and innards. Take that, pixels. The familiar zing of a victory glides through my blood, and it’s all I can do to keep the smirk off my lips. I haven’t been on Thanksgiving break for three hours, and already I’m kicking ass at video games and racking up the bragging points.

Dawn mutters a string of unintelligible syllables. It’s too bad not everyone’s having as good a time as me. “I will defeat you, Dwarf.”

I hit X on my controller to bring us back to the character selection screen. Dawn is the GM, Game Master, of the Marshalls and Magics campaign our group has going, and I play a dwarf. Possibly, she thinks calling me by my race will unhinge me enough for her to win a round. Not likely. “Yeah, yeah. Pick a character.”

Dawn sighs and selects Kerdwin, a random character who appeared in one of the side stories ten years ago. His combos are weak, and his powers are weaker. I keep all this to myself. Dawn pulls no punches during M and M. It’s not my fault if she’s bad at selecting characters in Bloodrage Anarchy: Silver Edition…or any other edition, really.

“Good choice,” I say instead and, with automatic movements, navigate three down and two over to Dalara, warrior princess of the outer realm of Simenia. The screen goes dark for the loading process, and our characters appear on the top of a narrow mountain. Lightning arcs overhead, and drums pound a war beat.

Round One, the game’s automated voice, which sounds like a constipated ogre, says. Kerdwin stands in a pathetic pose Dawn probably knows a name for. Dalara also stands in a pose she would know, but hers looks kick-ass and involves balancing on the balls of her feet and swaying. FIGHT! The constipated ogre bellows his call to arms.

Constipation or not, the call is all I need. I send Dalara into a flying kick and knock Kerdwin backwards. Next, I close the distance to execute Dalara’s strongest combo, a series of kicks and punches that will result in Kerdwin flying across the screen.

“Damn you.” Dawn blocks, breaking my combo. She jumps back until there’s an entire screen of distance between us.

Unfortunately for her, the reprieve will be slight. I regain my feet and go into attack mode, pressing forward twice and then the A button to activate a special attack. Dalara says something understandable only by the people of some tiny country in Asia, and dark flames erupt from her hands. I do this twice more, and Dawn’s life bar drops to a quarter remaining. She ducks my fourth attempt, leaps my fifth, and comes at me, getting through my defenses and landing a punch. The tip of my health bar turns red.

Oh hell no. That shitake will not fly. “Nice.” I send a high kick into Kerdwin’s face and follow with a punching combo. Kerdwin sways on his feet, and I shoot more black flame. “But not nice enough.” Dalara shifts to her ready stance. Kerdwin falls, and the game constipatedly announces my victory. Vacation has never been sweeter.

Dawn’s character staggers to his feet, and Dawn and I exchange the kind of sideways glance gamers use when they don’t want to take their attention from the screen. Parker plays an illusionist mage in M and M and, because he’s Parker, has named his illusionist mage Piff the Eviscerator.

“Silence, Gnome,” Dawn says in her intimidate-everyone-but-Parker voice. She’s probably hoping the boy will one day have enough sense to fear her and be quiet.

“Eviscerate!” Parker punches the air. “Blood!” However, that day is not today. 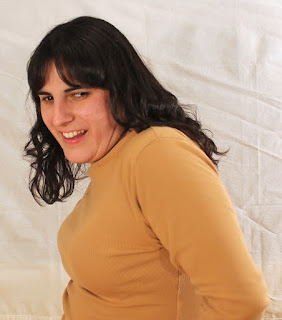 Deanna Dee is strictly human and does not, to her knowledge, own a hyena. She lives by the sea, which she takes full advantage of in the summer time. People, reading, and pop culture make up the shameless downtime of her life. The rest of it is writing, and she’s okay with that.