Enter this Goodreads Giveaway for a chance to win a free ebook of the first book of my children's horror series, Between Dark and Light: https://tinyurl.com/6ydtdumj! The book is called The Old Person Curse and the giveaway ends on November 7, 2021. 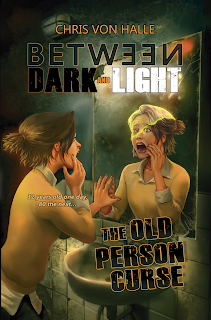 12 years old one day, 80 the next…Azie has no idea she and her family just moved into a cursed Victorian house in small town upstate New York. Until she learns about the Old Person Disease. Apparently, all the kids who ever lived in Azie’s new house over the past few generations died of a mysterious illness nobody ever knew the source of or how to cure. The disease slowly made the victims’ skin crinkle and hair gray out like an elderly person’s until they died a few days later. And now the same thing’s happening to Azie! Can she and her new friends find out what’s at the root of the bizarre illness and finally stop it—before she and future generations meet the same untimely fate?Between Dark and Light is a series of nonconnected children’s horror books featuring strange, eerie, supernatural events. Ages 10 & older!